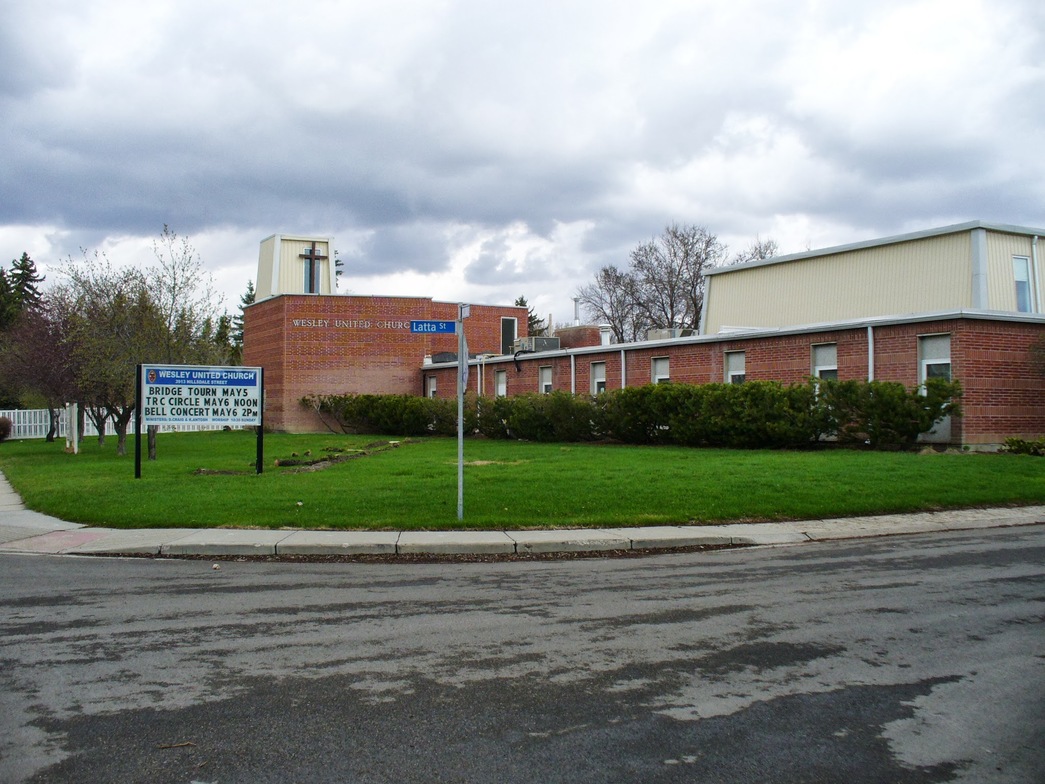 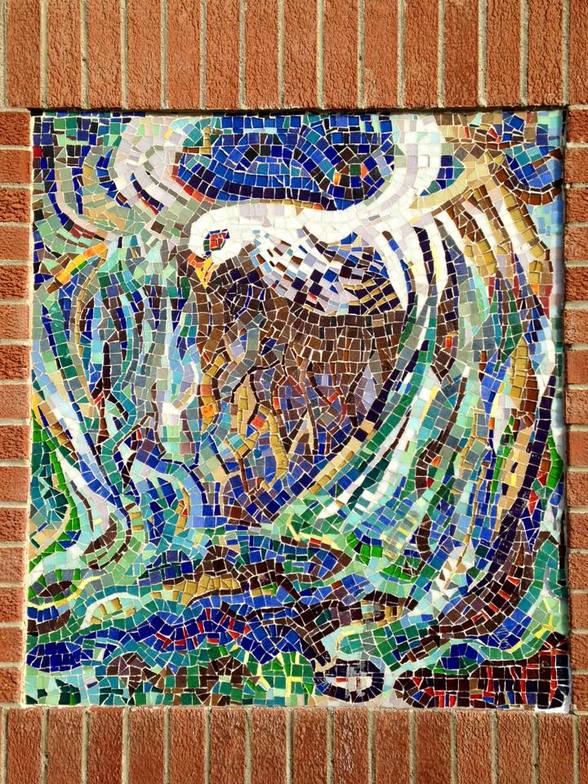 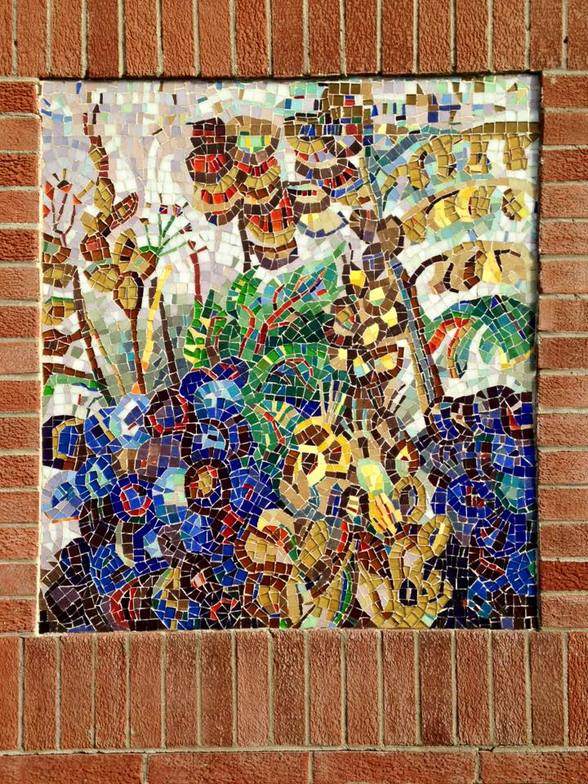 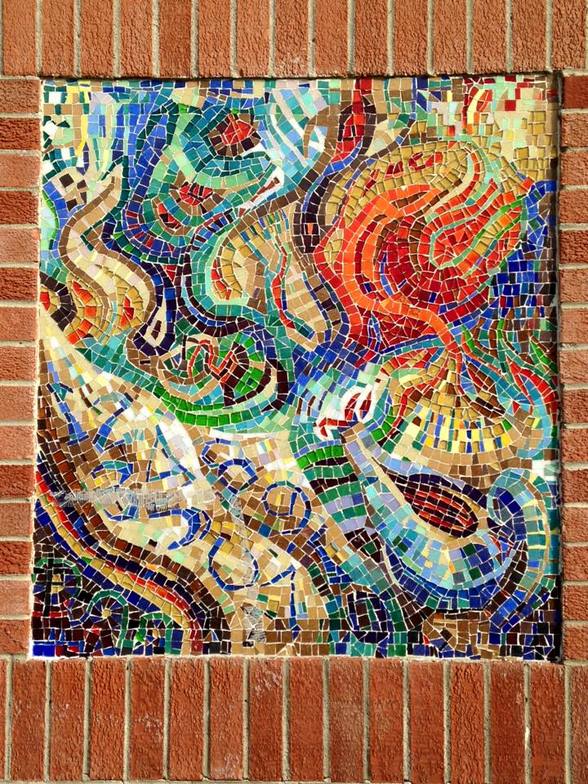 It's been said that history is like a photograph and memories are like paintings. History documents the past with indisputable accuracy whereas memories describe things as seen by the eye of the beholder. Since this publication is already filled with photos, you're invited to come along on a tour of the "paintings" in the Wesley "Art Gallery".

Let's start in the chapel. We see the way the sunlight floods in through the windows in the tower - through the hidden window over the exit to the chapel lounge. We take time to gaze at the banners in this special sanctuary. We remember special services and quiet moments, at Easter, at U.C.W. meetings and during many other gatherings.

The room next to the chapel used to be the minister's office. We think of Rev. Allen F. Crewe, Rev. Jack Towers and Rev. David Iverson. Rev. Crewe's time at Wesley began with the very first worship service, held on October 5, 1958 in the auditorium of the Physical Restoration Centre - now the Wascana Rehabilitation Centre. South Regina was in a period of rapid growth, with many families building new homes. The congregation at that first Wesley service numbered 110 adults and 50 children. The church community grew rapidly and supporters were able to raise $6,585.00 to cover the 1959 operating budget. A C.G.I.T. group was formed and three "Circles" were started - Susanna Wesley, Willa Kernan and Allen Crewe - within the Women's Federation. Property was soon obtained on the corner of Hillsdale and Latta to handle the growth. A temporary structure at the end of MacPherson Ave. was used beginning in 1960. By this time, there were 207 children in the Sunday School. The new building was dedicated in 1962 - membership had grown to 385. New groups were formed - Hi C, Explorers, Messengers, A.O.T.S., two new circles (including the Gertrude Patmore) and a Square Dance Club. Rev. Jack Towers took over as minister in 1965 and served until 1975. By 1968, there were 485 students in the Sunday School with 58 teachers providing leadership. Every available inch of space was used for Sunday School classes. Soon after David Iverson's arrival in 1976, the office was moved to its present location.

While in the lounge, we notice the art hanging on the north wall. It consists of reproductions of the three colourful mosaics by Lorraine Malach, installed in the west wall of the chapel back in 1963. These are genuine treasures. As we leave the chapel lounge with all its memories, we see wheelchairs in the hallway. These remind us of the Wesley Wheelers program started in 1974 and the purchase of the first "Wheeler" Bus in 1975. The room next to the chapel lounge, now the "nursery", once served as office space for Wesley's Christian Education Directors - Elinor Armitage, Norma Lindstrom and Janet MacPherson. Along the hallway, we pass notice boards filled with information about the wide range of activities related to Wesley's concern for the wider community. We are reminded again and again of the opportunities to serve, such as the Food Bank, Carmichael Outreach and Meals on Wheels.

Soon we arrive at the new and expanded office facility. We glance at the computer and the printer and our minds bounce back to memories of typewriters and Gestetners. More importantly, we remember those who served Wesley from within these walls. David Iverson continued his ministry until 1987. Other staff serving during his tenure included Marion Thompson, Rev. Alex Taylor, Rev. Don Faris, Rev. Mel Ryan and Maureen Kolot. We remember ministers who have served since David Iverson - Rev. Mary Duncan, Rev. Steve Willey and Rev. Carol Hancock from 1987 to 1989, the interim ministry with Rev. Harold Martin during 1990, then Rev. Bud Harper who served until Rev. John Haas began his ministry in 1994. We remember Mary Beer, who served with John from 1999 to 2002. In 2004, we welcomed Kim Antosh, a Lay Pastoral Minister in Training, who's work includes a focus on Christian Education and Pastoral Care. We think of the support provided by those who have served as office administrators - Sydney Walsh, Brenda Anderson and currently, Heather Cook. We think a "Thank You" for the maintenance work of caretaker, Jim Wolbaum. Our minds bounce on with more "Thank You"s to all the volunteers who have provided leadership on Council and Committees and served as Sunday School teachers, collection counters, project chairs and through involvement in all the other day-to-day activities. There are so many portraits hanging in this part of the "gallery".

As we continue our tour into the main church sanctuary, we are impressed by the versatility of the surrounding space. We're captivated by the cross over the choir loft, focal point of the extension added in 1985. We gaze at the banners hung along the front and side-walls. We look at the stained glass installation with its history dating back to the Regina Cyclone in 1912. We look at the volleyball courts outlined in the floor tile. We think of square dances, fowl suppers, concerts, "garage" sales, meetings and a huge variety of other uses. We remember Wesley Wheelers, Whirlers and Whistlers. Most important, we remember the inspiration and consolation associated with the hundreds of sermons to which we have dedicated our undivided attention. We recall funerals, baptisms, weddings and other meaningful events impacting on our lives. We remember many musical moments, such as the Wesley Band with David Iverson on the trombone. We think also, with great appreciation to choir directors such as Marg Botkin, Beryl Clark, Laura Grimson, Herb Jeffrey and for many years now, Betty Hayes. We reminisce about all those anthems on Sunday mornings - of Cabarets and concerts. We remember the acquisition of the new organ in 1978 and the grand piano in 1988 and think how much it means to have Alison Purdy bringing those keyboards to life at choir practices and church services. We think of the bell ringers and think another "Thank You" for Carol Chernishenko's leadership. How completely music captivates the mind and soul!

As we press on to the end of our gallery tour, we visit the kitchen and the kitchen lounge. We remember all the volunteer hours contributed by United Church Women and by the recently introduced monthly "Houses" We remember meetings of the Men's Club, of committees and of study groups - so many moments of careful consideration and inspiration.

There are two more parts to history - Today and Tomorrow. The present and the future become history so quickly. Today, we recognize Wesley United Church as more than just a place. It is people. It is a warm, caring community that reaches out in so many ways - in the neighbourhood - the city - the province - the world. There is a rich blend of challenge, consideration and care beginning within its walls and flowing out in so many directions. People at Wesley get involved - in Presbytery and Conference - in Lumsden Beach Camp - at Sophia House - at United Church Housing - at the Regina Early Learning Centre. Links to the community through other groups such as service clubs, United Way, and so many other support organizations grow out of the strong faith-base at Wesley. Tomorrow, in our changing world, we see a Wesley Website. Our proximity to the University of Regina and the First Nations University of Canada, might open new opportunities to serve. At the core of tomorrow's development is the ministry in words and music, in ritual and reassurance, in inspiration and motivation, that marks Wesley United Church.

I'm reminded of a poignant saying - The flutter of a butterfly's wings can be felt around the earth. I think it says a lot about what has been done in our yesterdays, is done in our todays and will continue to be done in our tomorrows. Who knows what sails might feel the touch of the winds from Wesley's wings?